It only seemed like yesterday that I wrote about W.A.R. 2 and how much I enjoyed the race series, and race number 3 was no exception. After receiving feedback from the previous race the organisers set out to make it longer and more challenging, and didn’t fail to deliver. Some details of the race had been revealed in advance and the top guys were expected to take around 40-45 mins, doubling the finish time of the last race.

I think I can speak for the majority and say that everyone’s first worry about the race wasn’t the extended distance, it was the heat. Taking place at the end of April, it was set to be a scorcher. Who’d have thought that we would see grey skies and lots of rain, a blessing indeed! 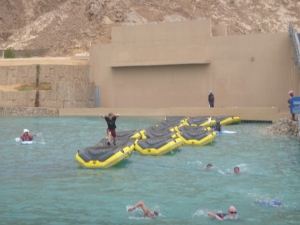 So the race brief began and the heavens opened making sure the competitors were wet well before they even started as we marched to the start line some distance away. This is where you could truly comprehend the great expansion of competitors as it went from around 50-60 last race to 150 this time around. The atmosphere at the start was vibrant to say the least and the rain seemed to have no affect on everybody’s high spirits. Now came the challenge of completing the race and achieving a similar result as last time.

The mass of people shot off from the line as I pushed straight to the front runners to get a god start. There were some fast runners out there and I dropped a few places but was still in good shape as the first 3km run was coming to an end. A leap over the first wall obstacle and it was onto the balance beams for a quick recovery.

I was doing well and it was time to go underground into the surf pool drainage tunnel to swim around 250m. It was eerily dark to being with, not pitch black but the eyes took some adjusting. I slowed down a bit at this point as my swimming slowly went from crawl to breast stroke, to something resembling a fish flapping around when its out of water. 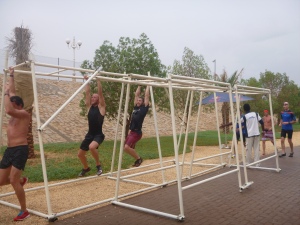 Climbing up the ladder and back to daylight it was onto familiar territory with the kayaking river and the long walk against the current. It was good because it gave me a huge amount of time to recover but awful because all I kept thinking about were those large yellow inflatable things that hampered my performance last race. Those ‘things’ being the upside down rafts and having to leap frog across them. However this time I just went for it and before I knew it I was at the end. I didn’t think or even register what was going on and relief hit me as I finished off the swim back to dry land, saying goodbye to the pesky water obstacles.

The infamous bag toss was next which turns out to be the undoing of so many. This time for me, however, it took 2 attempts and I was away, spinning around just in time to catch the disappointed faces of those who I had just taken, seemingly with ease. Another new obstacle next and it was a quick go on some monkey bars that could have been longer, but were still fun nonetheless. 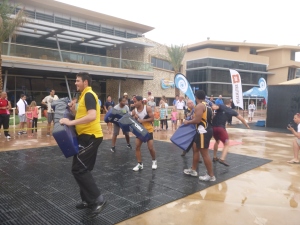 More running to follow and it was another 3km over off road terrain with a few obstacles to jump over and crawl under. In the distance the blob of white on the floor was instantly recognisable and before I knew it, I had thrown one of these white sandbags over my shoulder and continued running. I was feeling good but there was no one in eye view to catch so was constantly checking behind me, determined to make sure no one was sneaking up on me. I maintained the position I had,  and I was grateful to see the Wadi Adventure building signalling to me that there was only one thing left to do. The obstacle course.

Tyre runs, spiders web and everybody’s favourite wall remained, but there was something new. A group of men with pads who had a seemingly up beat demeanor which instantaneously changed as soon as you stepped into ‘their’ turf awaited me. I think everyone thought that the members of the Al Ain rugby team would give you a few taps here and there and maybe put you slightly off balance. No. They went for it. I tried my best to slip by and add some tekkers (skills) in there there but I was more obvious than and was immediately pummeled. It was fantastic. Over the wall with ease and I finished the race with a time of 45 minutes and 47 seconds and came in 10th place. Slightly outside what I hoped but with more runners and tri-beasts entering, it was expected. In spite of that, I had a great time and as usual the organisation was on the ball and this time there were a lot more spectators cheering which was also a bonus. 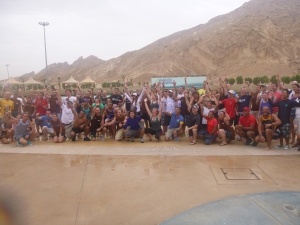 Again huge thanks to the Wadi Adventure team and I’m already looking forward to what’s in store for the winter season and W.A.R. 4.